Back to all posts

Conjunto Guantánamo, One of Today’s Most Authentic Traditional Afro-Cuban Ensembles, Drops their 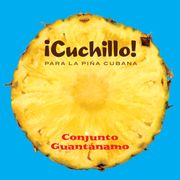 ‘Cuchillo para la Piña Cubana’ (out now) is the first single from the highly anticipated new album ‘Moviendo los Caracoles’ (coming April 12/Nganga Records) by Conjunto Guantánamo. From its first bars, 'Cuchillo para la Piña Cubana' draws the listener in with one new fresh rhythmic passage after another, before exploding into a full-on, high-energy Cuban dance number with all the strength and driving beat of a steady locomotive.

The band, once again, flexes its musical muscles establishing it as a true tour de force in traditional Afro-Cuban music and one of the most promising Afro-Cuban son ensembles of its generation. Conjunto Guantanamo are truly the ambassadors of Cuban folklore.

Led by its founder, Cuban percussionist Ulises Beato, the sextet features some of the finest players in traditional Afro-Cuban music today. Pepito Gomez’s lead vocals combined with the lush harmonies of the backup vocals and Itettsu Nasuda’s piano and Hammond style organ solo give this track a festive and contemporary feel, while staying true to the genre's nearly century-old style. The song was arranged by bassist Carlos Mena, whose pounding syncopated bass provides brazen backing to the the lively polyrhythms of Mauricio Herrera’s bongo and Ulises’ conga drums.

The band have recently enjoyed the support of the Louis Armstrong House Museum and was recently ranked  Number 6 on ReverbNation’s Latin Music category. They’ve also been featured on WPKN, WFMU and WVST in the U.S and Celtica Radio in the U.K.

This lead single from their upcoming album gives fans a teaser until the release of the full album in April, 2019. Co-produced by Ulises Beato and Pepito Gomez, Moviendo los Caracoles is a collection of some of the most beautiful and infectious Cuban songs ever written, masterfully refreshed in contemporary arrangements at Brooklyn’s Nganga Records by Conjunto Guantánamo. The album will feature 10 infectious new tracks and never a dull moment. Look for ‘Moviendo los Caracoles’ wherever you get your music starting April 12, 2019.